Role on Nikita, other updates

Posted on: 29th July 2012by: Samy OsmanPosted in: TelevisionComments: 1

One of the career highlights I’ve had recently, as the title suggests, is a role on Nikita! They had me play a “Division” tech. If you’re not familiar with the show, I basically played a part of the team at the headquarters of the secret organization that the show follows. 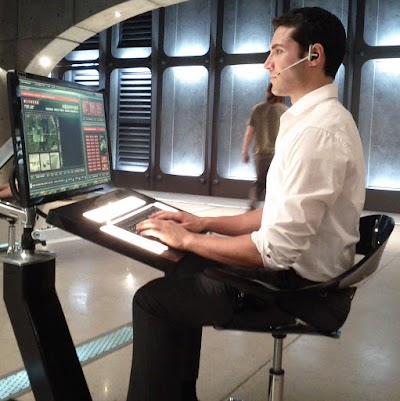 The fun thing about landing this role was the fact that I’ve seen all the episodes up to this point, so not only do I understand what’s going on but I got to meet and hang out with the actors behind most of the leads on the show. It was very interesting to play with characters I’ve been watching this whole time. On top of that, the crew was awesome to work with as well. Everyone was so welcoming on set, they made me feel a bit like an honored guest! I was introduced to so many people including the show creator…even had stand-ins who were great!

Another awesome thing was the fact that the studio was only about 5km from where I live! So I biked there everyday… One of the nights I was wrapped pretty late (between 1:00 and 2:00am) and my ride home was so peaceful and quiet, with lightning lighting up the sky at a distance. Dreamlike!

In the end, I had a great time playing on a show I actually watch, got treated really well and received great feedback and encouraging words, especially from Noah Bean (Ryan Fletcher), Lyndie Greenwood (Sonya), Aaron Stanford (Seymour Birkhoff) and some of the crew as well. On top of that, some were talking to me about the possibility of returning to the show and expressing that they’d like to see me again!

Most importantly, my mom follows the show as well, so she’s really happy that I got a role on it…now even more excited to watch the new season! Knowing this, and knowing that the character Michael is one of her favorites (from both the older series and the current remake), I asked the man behind the role, Shane West, for a favor. He graciously agreed (keep in mind my mom is French Canadian and her name is Annie) as you’ll see in the video below!

I will most definitely remind you when the third season begins so you can catch my appearance on the show! Also since the last update, I had another Harlequin book cover shoot, corporate video and independent film work and finally a online toothbrush video/commercial that should be released soon!